The saga about the Northern migrant route for asylum seekers wishing to reach a European country recently got a new turn: Since April 2016 the Russian-Finnish border in Lapland is closed for third-country citizens. The international staff of researchers at the Arctic Centre in Rovaniemi including me personally (a Swiss-Italian citizen) are deeply concerned by the new agreement between Finland and Russia about these new border-crossing limitations between Russia and Finland. It limits our possibilities to act as researchers in Russia, as well as it undermines the Euro-Arctic Barents Cooperation in general. For example, I do research among the Russian Sami people, and it has been essential in the past years to cross the border to reach the Murmansk Region for doing my research.

Many people seem to wonder: Why? How could it be that such a deal could happen? 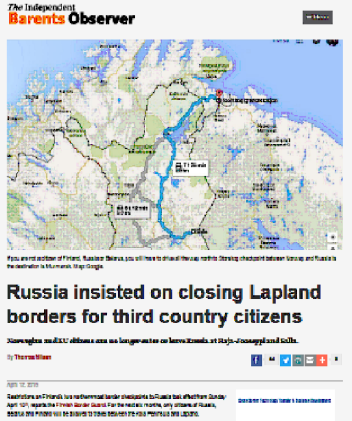 I have been talking a lot with other people both in Finland and in Russia, and also read some materials about it. The most visible English language source of information on the topic is The Independent Barents Observer. In their article “Russia insisted on closing Lapland borders for third country citizens” they basically give this explanation: “Russia wanted to split Finland from the EU”, and this also seems to be a mainstream opinion in Rovaniemi, where I live. However, in my opinion, this explanation inadequately reflects the true situation behind the current border closure for third-country citizens. I would like to elaborate on this.

It has been conveyed also by the Finnish mainstream press (which I am going to criticise below) that the closure of the border was Finland’s initiative, and that Finland asked to include the EU/EEA+Switzerland countries into the list of allowed countries. However, what is not conveyed by any of the mentioned sources is the principle of reciprocity which is a basic principle of any bilateral negotiations (I worked myself in diplomacy before joining the Arctic Centre as a researcher).

In this case, reciprocity means an approximate balance in the amount of countries exempted by the agreed border restrictions. According to oral information by a Finnish border guard, during the negotiations Russia asked also to include several countries which it is on good terms with, exactly as Finland did. That are countries like Kazakhstan, Kryrgyzstan and some other countries, which are not producing refugees (although for some Western populists and their followers countries with a name ending on “-stan” may by default evoke such fears). In simple words: If Finland asked to include its friends, then Russia also wanted to include its friends. By all standards, it is highly unlikely that an unequal deal FIN+30 countries vs. RUS+1 country is possible, and in the end the Finns evidently opted for a deal only FIN+RUS/Belarus. As it is a common practice in international diplomacy to make agreements on equal terms, this sounds to me as a much more rational explanation than the simplistic explanation mode “it’s Putin, stupid!”. It must be said clearly: It was the Finns who rejected an equal deal with a higher number of included countries on both sides and thus heavily undermined Barents cooperation and European cooperation in general.

Instead of giving a balanced analysis explaining the reasonable arguments of all involved parties, both the Finnish tabloid Iltalehti and The Independent Barents Observer (which is even more disappointing given its declared “devotion for cross-border cooperation, dialogue and mutual understanding“) adhere to a way of reasoning which long since has become a standard explanation for almost everything which goes wrong in relations between Russia and the West. This shallowness of reasoning is highly regrettable. Their statement that Russia insisted on such a deal because it wanted to tear apart Finland from the EU is not just shallow. By presuming that Finland would have had no other choice than agree with Russia’s demands it also wrongly presumes a limited sovereignty of this country. However, Finland is a fully sovereign country, and it could have simply withdrawn its initiative on closing the border if it did not agree with Russia’s legitimate demand for signing an agreement on equal terms. Unfortunately, it opted for the isolationist way.

One thought on “Who closed the border between Finland and Russia? A reply to The Independent Barents Observer”