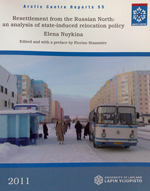 Resettlement from the Russian North: an analysis of state-induced relocation policy

Written by Elena Nuykina, edited and with a preface by Florian Stammler

The anthropology research team is happy to announce the available download of a new study on relocation, mobility and locality in the Russian North. Arctic Centre Report number 55 by Elena Nuykina edited by Florian Stammler combines a thorough policy analysis of demographic engineering in the Russian North with insights in to the lived experience of people affected by such government policies.

The top-journal “nature” recently published a special issue on the Arctic, yet another proof on how important our field region is.

I liked Henry Huntington’s piece on Arctic residents’ knowledge and how important this is for understanding the changes happening in the North. A good overview, and touching on the crucial issues for the future. But it would have been good to elaborate a bit more on the role of social science in that interplay between residents and natural scientists. This is not his fault of course as he didn’t have the space to do so in this publication. His one story there about the shrimp-eating seals was illustrative but anecdotal. It is crucial that we understand our roles properly and make use of each other’s expertise, for the benefit of the whole. Some think that indigenous people can be good scientists just by the fact of living on the land, some scientists think that by talking to indigenous peoples they do social sciences. These misassumptions spoil the reputation of our field, as Henry rightly mentioned. We spend decades to become experts in our respective fields, be it natural science, reindeer herding, sea-mammal hunting or social anthropology.

Acknowledging this, we can make use of each other’s expertise when working together towards a more liveable North! But it is up to us anthropologists to be even more active in showing how this working together can be done in practice. We are the experts in cross-sectoral cross-cultural communication and work, and we can’t expect from our science colleagues or our friends in the field to do this cooperation job alone. But it’s a long uphill battle for us, and not everybody may want to engage in it.

All in all, the table of content of the special issue of nature left more questions open than it answered from an anthropological point of view. But it’s a journal about nature after all, not about people, and that was the focus. There isn’t any piece in there about the situation of residents in the Arctic whatsoever. Using their knowledge for making sense of climate change is as far as it gets, which is turning the real reason upside down: in fact we do climate change science in order to keep our planet liveable for humans after all, not the other way round! Sounds like typical “human dimension of climate change” In fact, as we have outlined elsewhere, any science is a “natural dimension of human existence on our planet”, because nobody would do science if it wouldn’t be related to human livelihood somehow. Share your view on this with comments, suggest plans  and share your ideas on this!

Hello everybody, this is Sara Komarnisky, phD student from British Columbia, Canada.
I would like to share some impressions from the field here, comments are welcome, particularly concerning “the North in the South”, and vice versa, as well as migration in the North

This summer I began fieldwork for my PhD dissertation in a town in the Mexican state of Michoacán, near the capital city of Morelia. My project explores the historical and ongoing connections between Alaska and Mexico and how and why those connections have been obscured or ignored. I hope to show you a little bit about how and where Alaska can be found in this town – and how I have gone about looking for and documenting the connections between the two places.

END_OF_DOCUMENT_TOKEN_TO_BE_REPLACED

The anthropology research team was happy to be invited to the North Eastern Federal University of Yakutsk in Eastern Siberia, held on 28th and 29th of September. Yakutsk is the capital of the Sakha Republic, Russia’s biggest administrative unit with the coldest winter temperatures and a population of just under 1 million inhabitants.

The faculty of law and the international department took the lead in enhancing international cooperation across northern countries at the University. The background is a Russian Federal University reform, under which Yakutsk became one of the only 9 Federal universities in the country with an expressed international mandate.

Our first day of the visit focused on official meetings with the University leadership, meeting students, faculty, and teaching research topics and methods to them. That generated great interest among the just under 100 students, who stayed twice as long as scheduled in the packed lecture hall. Towards the end, active discussion revealed their interest in study and life in the western North, as well as exchange opportunities, as for example under the Uarctic’s North 2 North programme.

On our second day we gathered in the posh hall of the dissertation evaluation council in massive armchairs for the conference, opened by the vice-speaker of the Sakha Yakutian parliament, Andrei Krivoshapkin, one of the top indigenous politicians, Eveny by nationality. He finished his opening speech by praising the BBC documentary on his home region, a documentary which the anthropology research team had set up in 2010.

One cluster of presentations dealt with legal aspects of competing land use in the North, especially where industry and indigenous livelihoods coexist. Another cluster was on solving conflicts between different land users with the focus on compensation arrangements for indigenous residents. Thirdly, presentations dealt with the historical forms of organisations of land use in this part of the world, where indigenous Eveny, Evenki have lived with Yakuts and Russians since the late middle ages.

We felt reminded of Lapland when hearing the statements that legislation for indigenous peoples should focus on language and cultural preservation. While progress had been made since the 1990s, the laws do not yet really work in the region. For example, the numerical restriction in the Russian legal definition of indigeneity was discussed and criticised – a topic about which colleagues have published before (linkt to Anna’s article).

The conference ended with passing a resolution on legal and developmental aspects of coexistence with industry and indigenous land use. A Northern Indigenous Minorities Centre will be recommended to be established, which would be the only one of its kind in Russia. The resolution will be presented to the Sakha Yakutian Parliament, and may become the base for a Sakha initiative in the Federation Council of Russia – the Upper Chamber of the Parliament.

During their visit, the three foreign guests Florian Stammler, Nuccio Mazzullo (Arctic Centre) and Ingo Heidbrink (Old Dominion University, Virginia, USA) received the “red carpet treatment” everywhere, in best Russian tradition of hospitality. We got an extensive social programme including nice restaurant with raw frozen fish and other local delicacies, ethnographic excursion, permafrost chamber visits, ice sculptures, and city excursion.  We thank our hosts, especially Aitalina Ivanova, for all the hard work in setting up this meeting and taking so good care of us, and look forward to further meetings in the future.

Last but not least, we were so happy to experience one more lovely surprise as we were met by our former intern Natalia Bochkareva. She had heard by chance about our visit to Yakutsk and was able to meet us a day before she would leave to Germany. After her return from France Natalia has successfully graduated and was now about to continue with some further postgraduate studies in Europe. We thank her for her warm-hearted thought and for her specially handmade traditional gifts that will remind us of our reunion and will accompany us on our return trip to Lapland!