From 15-22 February a group of roughly 20 people spent a week in the centre for Russian Diamond extraction, the city of Mirny. Students from circumpolar countries – and not only – had different topics in their social sciences research project, but all of them united around the overarching topic of the Social Sciences related to the development of extractive industries in the Arctic. This time we had way more applicants than we could fund or even admit to the course. We ended up with an excellent group from Alaska, 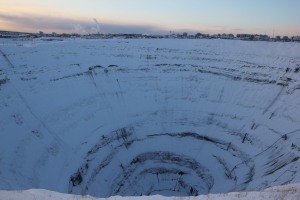 northern Canada, Norway, Sweden, Finland, Russia, and Austria. The course followed the good experience of a previous course, when half of the programme was in-class teaching, while the other half was in the form of field excursions. The two principle highlights of these excursions were the “pipe of peace”,  one of the world’s biggest man-made holes, where diamonds were extracted until 2001. That hole can also be considered the cradle of Russian Arctic Diamond extraction, and was the reason for the establishment of the single-industry town of Mirny.  (Read on for a course report)
The other highlight was the visit to the diamond sorting centre. Here we learned interesting details, for example that diamonds polished in a round shape (kruglaya ogranka) are considered higher priced than cornered ones, even with otherwise identical parametres, carat and purity.
The whole group was impressed when we entered the presentation room of the sorting centre, and there we were greeted by a big logo of Uarctic, laid out on a billiard table, all made of diamonds! That logo itself, says the deputee general director of the sorting plant, is worth 7 million dollars! This was maybe the most expensive logo Uarctic ever had.
This fact also made us understand how the diamond industry has a special position as a strategic resource. Very small amounts of it is so expensive! Therefore, the choice of Mirny as a place for this course was strategically made, so that the participants could somehow “feel” the strategic importance of this industry for the entire country.

Indeed, it felt very important to sit in a rather small Arctic industry town of 35000 inhabitants far away from any other inhabited place, and yet feel yourself at the centre of the world of this industry, when the company employees talk about de Beers, South Africa, the diamond exchange in Antwerpen (Belgium), as if those places would be right around the corner and the most obvious connections to talk about.  On the other hand, the hosts were very aware of the security aspects of having such an international group talking about strategic industrial resources in a town that was formerly closed for access even by Russians other than those who worked there. In comparison to the course in the fall 2014 in Neryungryi, we were therefore not addmitted directly, and so closely to the physical places where the extraction and processing of diamonds happens. But this very fact added to the experience of the national and geopolitical importance of diamond extraction, and again the Arctic is one of the principle centres of this industry on our planet. Given that importance, it came as no surprise that the indigenous population was not really present in the city and its environs, and in anything connected to this industry.

In Mirny we could feel especially well that there is probably no sphere of life that is NOT connected to the diamond company Alrosa. It started already in Moscow airport, from where we were flying in on an Alrosa airplane, together with an Alrosa sports team, shopping in an Alrosa grocery store, visited the Alrosa research institute, the Alrosa Hydoelectric power station, and so on.

There is, however, a community, in a village out of town, who got a land title for their community just recently, while on the same land mining prospectors would be interested in exploratory drilling. But this is a question that could be studied next time in smaller groups, when we would not “invade” as a course group of more than 20 people a small community.
The course gave some of us a boost of curiosity to find out more. That made us realise the interest of some students to complete the entire Arctic Extractive Industries PhD or masters programme. In Mirny, the first masters-participants completed all requirements and are also now entitled to a Uarctic certificate, which proves that they are recognised experts on Arctic Extractive Industries on their level.