Some of our team were recently at the Jokkmokk winter conference, which is held in connection to the famous Jokkmokk winter market, an important event in the Sámi yearly cycle for the last 400 years. 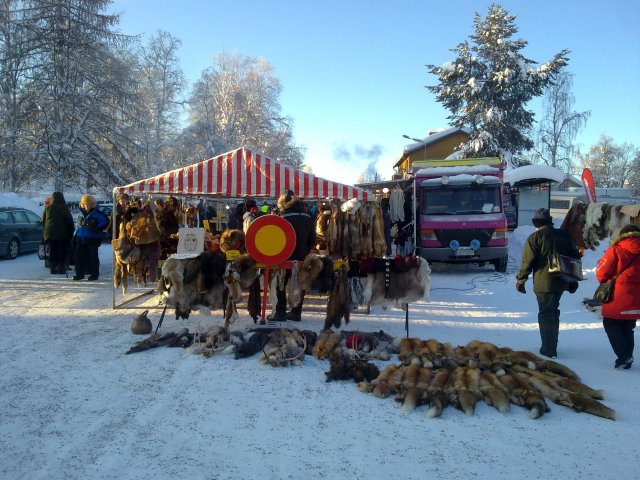 The Jokkmokk winter market has been held already more than 400 years. Now mining comes closer to this place too, causing hot debates

At the conference which had a very policy and environmentalist NGO-related character, a

lot of talks were about mining in the North and existing as well as possible impacts. Matti Berg, who organises adventure tourism trips in his home area, gave an impressive talk outlining what would happen if the mining expansion south of Kiruna would happen. The territory of his group’s, the Laevas Sámi’s reindeer pastures would be split in two different parts, and there would be no way any more to move the herds from the summer to the winter ranges and back. There is a more detailed article on this case here.

I found impressive that when talking over the lunch table, he was not in principle against extractive industries, but the way in which companies and the government handle his case is not acceptable to him. With this view he even finds support among the authorities in Kiruna and some of the mining workers themselves. This showed very well that borders are not that clear in this question. It is not that mining workers are always the bad guys who only destroy the environment. There is also lots of love for the natural and social environment around the mines among those people, as Anna Bolotova’s work in our previous project shows.

This becomes also clear from the discussions around Pajala and the Kaunisvaara mine project, where the company Northland Resources is struggling for survival. Some local people fear of job losses and a halt to development, something that neighbouring Kolari residents have experienced already when their Rautaruukki mine was closed in the late 1980s. There is a good report on this here, from a book published with the United Nations University Press.

Different from other circumpolar sites, it seems to me that in northwestern Europe the discussion of mining impacts is most closely related to tourism. Probably because the distances are not so far and the infrastructure so much better than in other areas of the Arctic, these places are easily accessible for Arctic adventure tourists, and mining is therefore in direct competition for natural resources that not only indigenous peoples need, but also tourism companies.  Another reason is maybe that mining is such an old industry in these areas too, reaching back more than 300 years, as you can find out from Niikko Sommer here .

Probably the discussions at the upcoming conference on good practices in mining in the Barents region will focus a lot on that interface with tourism too. That issue is also now under increasing discussion in the Murmansk part of the Barents region, where the regional administration supports tourism development. There, in Kirovsk-25, you can spend a wonderful downhill skiing holiday almost on the territory of a still functioning mine established in 1929!

Can somebody post a bibliography or other links to this mining and tourism in the Arctic topic?

3 thoughts on “Mining and local people in the North”