It was a small but extremely diverse group that we got together between September 10-16 in St John’s, the capital of Newfoundland, Canada. The participants to the course came from 5 different institutions and 7 different countries, to learn for a week more on a broad variety of topics related to what the economists and business studies people call ‘human resources’ and we in anthropology call ‘people’. Actually, Gertrude Eilmsteiner-Saxinger, one of the participants of the course, made a valuable comment in this respect – which is that at least for us the term ‘human resources’ totally lacks the agency of people who are involved in or affected by industrial activity. So maybe it’s better to call this next time ‘human agents’?

“It was excellent teaching, it was interesting topics, it was free, and it was fun” – along these lines Gertrude Eilmsteiner summed up the course – quite nice, thanks Gerti for the nice quote, and sorry if I don’t remember it as exactly as I wish

The course was designed for PhD students who do their research on some topic related to extractive industrial development in the Arctic. These courses are part of a PhD programme, in which students do three such courses and visit three relevant conferences, and – if all assignments are done and approved – get a certificate of Uarctic in addition to their degree that emphasizes their expertise in Arctic extractive industries.

We define the Arctic broadly here, as e.g. Newfoundland is as far south of Paris. and yet the same day we arrived, Rudolf Havelka

and I felt at home immediately during a long walk on the coast in St John’s, where we found loads of HUGE blueberries, and thick patches of lichen – Arctic vegetation at Paris latitude!

As a PhD course, the design was not as much oriented towards contact teaching and knowledge transfer from professors to students, but more collaborative work, where students were expected to do readings for each course day, the broader topics and implications of which we would then jointly discuss. The group was also small enough that it was hardly possible for anyone to ‘hide’ when they hadn’t read the articles. This made the discussion very engaged, and although we spent 4 1/2 days from 9-16 in the class room, we never ran out of inspired engaged conversations.
One of the particularities of this special course set up in the PhD programme on Arctic extractive industries is the multidisciplinary approach, a bit similar to the ARKTIS graduate school. One course day was on Business, management, organisational behaviour and industrial relations in the field (Gordon Cooke, Tom Cooper), another on gender relations in the extractive industries (Sue Hart, Kara Arnold), another on project lifecycles, labour organisation and fly-in / fly-out organisation and its social implications (Arn Keeling, Gordon Cooke, Gerti Eilmsteiner-Saxinger), yet another on impact assessment and aboriginal / industry relations (Peter Evans, Florian Stammler), and yet another on geopolitics, international relations and resource governance in the Arctic (Gunhild Hoogensen-Gjorv, Jessica Shadian).

As a result, for example Rudolf Havelka, our double-degree student from Lapland/Brno doing his PhD on religious change of the Forest Nenets in a heavily oil-industrial area, found out about how women working on oil platforms off Newfoundland experience gender inequity in a male-dominated industry, or how the legacy of what Arn Keeling called “Zombie mines” lives on in the environment and in the memories of people inhabiting the extraction sites as well as of those who left after mine closure.
We also thoroughly enjoyed the input by Peter Evans, an anthropologist and geographer from British Columbia who has established his own consultancy company (evernorth) and talked about how anthropologists can do very useful applied work with their qualification that is actually useful for the local people with whom we usually bond most in the Arctic. For example, he did what is called in Canada ‘traditional resource use studies’ and ‘traditional knowledge studies’ for aboriginal communities, for example the Fort MacKay First Nation heavily affected by the Alberta Bitumen Oil Sands. For this purpose, they developed a ‘community information system’ in an online platform programmed in the freeware Drouple. Aboriginal community members can access there for example the land use information that they gave in interviews with Peter. You would see a google-earth map with layers of information of how somebody uses the land around where they live. Or they can access life histories that they told, and of course all the official documents related to the industry projects in their area.
Very relevant were also two bits of information by Peter on the Canadian northern extractive industry: firstly, that impact-benefit agreements (IBA) are usually made entirely separately from any impact assessment procedures. In other words, the negotiations about what the aboriginal community has with the company no how much financial or other benefits they get from the presence of industry in their area, are not related to the assessment of environmental and social impacts that is done for every new bit of industrial development on aboriginal lands. Whereas the IBA’s are usually kept confidential by both the company and the aboriginal community, impact assessment documents are public.
Secondly, as somebody working in Russia I found it remarkable that the challenge aboriginal training and participation in full project life cycle monitoring of industry projects is not well regulated nor carried out systematically. In other words, Neither in Canada nor in Russia there seems to be a working mechanism so far  in how people living in industry areas themselves can help monitoring what happens in their environment and society in the course of an industry project. Why shouldn’t people themselves learn to become ethnographers of their own communities and report to a board for example how their social organisation and inequality change, or their perception of the environment? At the Arctic Centre anthropology team, we are working with a Yamal-Nenets obshina on such a monitoring plan. All we would need is financing for it:)
Besides all these interesting topics, the course hosted by the Business School of Memorial University also gave us some great adventures exploring the city of St John’s and 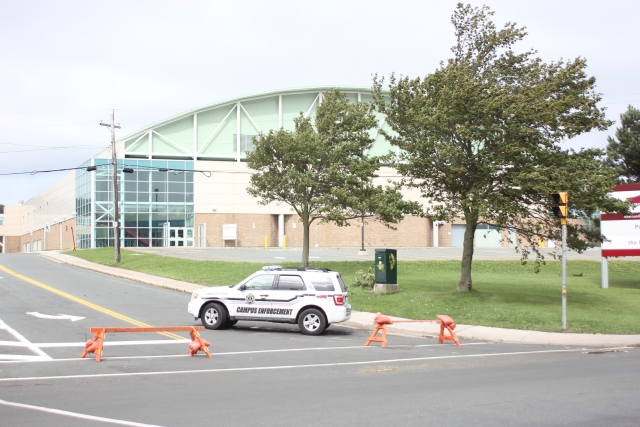 Memorial University’s own police blocking access roads during closure day because of hurricane Leslie. Roofs came down, and trees fell, and electricity blackouts happened all over the place

around. The whole university was closed that day for safety reasons, and we had a free afternoon to go out and witness the wind on the rocky shore.
On Sunday, PhD student Heather Clarke was so kind to take us to North America’s easternmost tip – spearhead. There the coast really looked barren, rocky and somehow Arctic in its beauty. But as impressive as that where the huge cannons  that were installed there during WW II in order to fight the German Nazi U-Boot submarines that made their way all the way to try to cut iron and weapon supplies over the Atlantic for the allied forces.
All in all, I think the guests from Europea as well as the students and staff from Memorial University learnt a lot during the course-week, and the Uarctic thematic network leaders Florian Stammler and Jessica Shadian thank the people at the Business School, especially Gordon Cooke, Kara Arnold and Heather Clarke,

for hosting the course.
The next course in the PhD programme on Arctic Extractive Industries  will be in June 2013 hosted by the University of Tromso, Norway. We are working on the outline as well as the funding. Some funds to bring students and instructors may be available. If we are lucky, the course will also include a trip to Svalbard (Spitzbergen). Interested students with some topic related to extractive industries in the Arctic can preliminarily express their interest by writing an email to Florian Stammler or Jessica Shadian. More on that here on the blog later.

2 Responses to Human agents or resources in Arctic extractive industries?