I would like to announce a newly published book exploring why the cradle of our discipline was to be found in ethnographic research in the Russian Arctic. The present book sums up the results of decades of research into early ethnographic scholarship during the exploration of Siberia in the 18th century and its links to the German enlightenment. 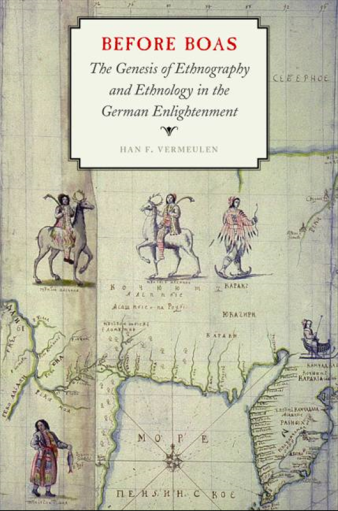 The history of anthropology has been written from multiple viewpoints, often from perspectives of gender, nationality, theory, or politics. Before Boas delves deeper into issues concerning anthropology’s academic origins to present a groundbreaking study that reveals how ethnology and ethnography originated during the eighteenth rather than the nineteenth century, developing parallel to anthropology, or the “natural history of man.”

Han F. Vermeulen explores primary and secondary sources from Russia, Germany, Austria, the United States, the Netherlands, Hungary, the Czech Republic, Slovakia, France, and Great Britain in tracing how “ethnography” was begun as field research by German-speaking historians and naturalists in Siberia (Russia) during the 1730s and 1740s, was generalized as “ethnology” by scholars in Göttingen (Germany) and Vienna (Austria) during the 1770s and 1780s, and was subsequently adopted by researchers in other countries.

Before Boas argues that anthropology and ethnology were separate sciences during the Age of Reason, studying racial and ethnic diversity, respectively. Ethnography and ethnology focused not on “other” cultures but on all peoples of all eras. Following G. W. Leibniz, researchers in these fields categorized peoples primarily according to their languages. Franz Boas professionalized the holistic study of anthropology from the 1880s into the twentieth century.

If you want to purchase the book directly from the publisher feel free to mention the discount (25%) code when ordering in the US with customerservice@longleafservices.org use code 6AS15.

We are honoured and pleased to have Julie Cruikshank for the better part of the first week of April with us here in Rovaniemi. It won’t pay enough respect to her fame to introduce her here briefly. There is enough good praise for her work in the net, most recently through the 2012 Clio award for her lifetime achievement . She will participate in the ARKTIS graduate school annual seminar, but also spend time to talk to us about oral history theory and practice, epistemologies, and other fascinating topics on

After the session, the ORHELIA project welcomes all participants to a discussion and an ‘Arctic grilling’ at a laavu. Everybody with an interest in these topics is welcome!

Abstract: The concept we now call ‘indigenous ecological knowledge’ continues to undergo transformations with real-world consequences.  Systematic use of this term appeared in Canada during the early 1990s, when its potential contributions to understanding the natural world became a topic of discussion among researchers working in arctic and subarctic regions. Concepts, however, travel. They carry and accumulate meanings that may have unexpected consequences.  In the twenty-first century, the terms indigenous and knowledge have each become contested, internationally and locally. My questions are: What is not recognized as knowledge in dominant regimes? What is lost when local knowledge in Canada is trimmed and transformed to fit the requirements of science, policy and governance? Strikingly, ethnographies from northern Canada that give weight to ontology, values, social relations and meaning are taken up and developed theoretically and in public and political forums in South America (Viveiros de Castro, Blaser, de la Cadena) with implications for subarctic regions.

Please see a full poster on our lectures & events page, more questions to Anna Stammler-Gossmann or here in the comments of this blog entry.