The second community meeting ‘Norwegian fjord: Living with Changes’, organized by the Arctic Centre (Anna Stammler-Gossmann) took place in the remote coastal fishing village of Bugøynes (Finnmark, Norway) on June 7-8, 2019. How is seawater perceived and used due to experienced changes, and how do coastal communities accommodate these changes? These questions were the focus of the two days’ community workshop. (Programme_invitation_doc)

This picturesque place with around 200 inhabitants, surrounded on all sides by Arctic water has experienced several changes. Local residents remembered about the collapse of cod stock in the 1990s that ruined the economic base of the community: the processing plant was shut down, people lost their jobs and outmigration began. At the same time, the arrival of a ‘monstrous’ alien species – the red king crab – brought shock and additional uncertainties on how to deal with new challenges.

Positive changes came to the community after a group of villagers wrote a letter titled ‘A village for sale’ to the central national newspaper. The publishing of the letter made a tiny village well-known overnight. It was a crucial point that signified a start of new big turns in the village’s life. The motto of the long-term local partner, who helped to organize this meeting and who was at the beginning of the ‘wind of change’, is ‘do not wait but be proactive in creating your working place!’

By the end of the 1990s the ‘Arctic sauna’ was built on the shore and offered an exotic lifetime experience for tourists – to take a dip into the water of the Arctic fjord after a sauna session or to swim under northern lights in wintertime. New economic activity, tourism, was introduced to the remote village, where no gas station or medical service are available. Last year brought around three thousand tourists as was reported during the workshop.

The invasive crab became a blessing for the local economy and contributed to attract tourists. The king crab ‘hotel’ was established, a facility for storing crabs before selling them around the world. King crab safaris are now in the tourist program, and king crab as a local food is offered in the village’s only restaurant. Several tourists also joined the meeting that took place in a recently built ‘Aurora house’ with a beautiful view on the fjord. 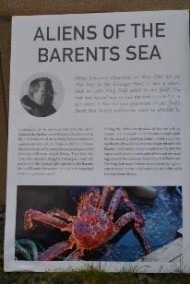 Posters presented during the meeting

Nevertheless, the question whether the king crab is a burden or asset for the villagers, will be not answered by locals in one way. The invasive species helped to turn village from being on the brink of extinction into a flourishing tourist and crab-fishing place.  However, even though a tourist’s delicacy, king crab legs are not part of a traditional menu for the coastal inhabitants. The still ongoing discussion on a potential threat to benthic (sea floor) ecosystems posed by these species still brings uncertainties to community life. As a crab fisher said: ‘The Crab does not have natural enemies, the shell is very hard’.

What remains in the locals’ minds is the passion for cod (“we have to go to fish cod, but go now for crab”), for fish cakes (“if you have a fish cake at home, you have food”), and nostalgia for the time when the processing factory was in operation (“it was also our community meeting place”). Elderly members of the community emphasized that village needs a processing factory to bring the caught by villagers fish to Bugøynes and not to other places and to create working places for women‘. 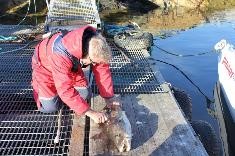 Tourism business is a relatively new activity for the fishing village and because of its small population it still has difficulties to attract local people. At the same time, hosting the tourists has been a learning process for all residents. Visitors are very welcome, but all community representatives noted that the mass tourism, especially in the summertime, is not suitable for such a tiny place like Bugøynes.

Anna Stammler-Gossmann gave insights in her presentation into the history of the mass king crab transfer from the Far East and their introduction to the Barents Sea. Everybody in Bugøynes knows that red king crabs originate from the Far East and was introduced by Soviet scientists, but the questions as to ‘why and how’ were issues that gained great curiosity among the local residents and tourists.

They also had several questions and comments to the exhibited posters and pictures from the anthropological fieldwork conducted in places where king crabs are fished (Murmansk/North West Russia; Kamchatka/Russian Far East, and Patagonia/Argentina). In addition, one tourist from France, who by chance was a scientist from the field of biological oceanology, raised the issue of Norwegian whaling hunting and selling of wild bird eggs. The following discussion turned into a debate about the meaning of subsistence economy and traditional culture that advocates these activities.

An art workshop ‘Stories of the sea and fish mandala facilitated by prof. Satu Miettinen (Faculty of Art, University of Lapland) gave the community meeting a particular intimate and personal note. Drawing the fish mandala and storytelling turned into a reflection of people’s life cycles and complexity of meaning-making processes. Stories told during the workshop about the fish and fishing in their visualized form were not just about the acting or consumption, but more about memories, trauma and joy, changing meanings and individual or community needs.

The community meeting in Bugøynes had a very different format in comparison with the community meeting in Finland. This workshop demonstrated an importance of using a variety of available tools and approaches to facilitate local community engagement. Time ‘currency’ in a fishing village is different from what we know in an urban environment. Villagers might say, “if you do not at work at 7am you can continue to sleep”. This community meeting did not have scheduled sessions; people came, observed, talked, discussed, left and came again. “Catching” the tourists has similarities with catching fish.  People anticipate, but cannot predict exactly when fish or the tourists arrive.

Knowledge and experiences exchange helped residents to accumulate their central concerns during the discussion. Considering diversity of presented perspectives from fisheries, tourism, research, elderly residents and village visitors, the meeting provided a good base for identifying and expressing existing indeterminacy.

Economic diversification within the sector is the most common medium for coping with changing environmental conditions in the northern communities. The small coastal fishing village does not have a great variety of opportunities for this kind of diversification. Nevertheless, the residents have managed to switch their activities within and outside of traditional fisheries. They are discovering possibilities to deal with newly emerged challenges – the presence of many tourists, increased waste and increased demand for fuel, the absence of the medical services etc.

However, in spite of successful practices in dealing with the changes in the sea, the meeting reflected that the relationship between water, land and infrastructure has been changing faster than the cultural code. The case of Bugøynes shows that the changes in the seascape cannot be reduced to biophysical characteristics and economic resources. Effective community engagement in research is essential to identify complexity of spatial values in their contextual meanings. However, for meaningful implementations of adaptive measures to changes it is important to ensure that those local values are translated into policy and practice.

The organizer gratefully acknowledges the financial support of the Leverhulme Trust (grant number 220000061711) and wishes to thank Elsa Magdalena Ingilæ Haldorsen (Bugøynes Opplevelser) for her assistance.