My next stop in the Svalbard archipelago is the tiny Russian settlement of Barentsburg. How many people are living here is hard to say. The number of residents may change by the end of June and August, when an airplane from Moscow lands in Longyearbyen airport. It may bring 100 workers and take some back to Moscow. ‘I tell the tourists that there are 200 people here, my colleague may operate with different figures, tells one of the local tourists guides. Tourists have around 1,5 hours here to admire a ‘Soviet relict frozen in time’, ‘a perfectly preserved slice of a country that no longer exists’. This time is enough to have a look at the rusty Soviet heritage, buy some souvenirs and send an ‘I was there’ postcard, which will be sent with the same boat by which you arrived here.

To make the site more appealing to Western tourists the local administration decided two years ago to place an old “Our goal is communism” banner in the central square instead of the not so exotic ‘Barentsburg’ banner. It is a good accessory to the statue of Lenin, which looms over the settlement.

I could not stay in Barentsburg for more than three days. There is only one accommodation option here, Hotel Barentsburg and only one option to get a meal here – in the hotel restaurant. Almost everybody here, whom I met, told me how convenient it is to have the ‘Barentsburg’ card for any monetary transactions, including eating in the canteen and moderate shopping: ‘You fill a form how much you need monthly to be transferred to this card from your salary and you have an overview about your expenses. If you go over this amount, you just have to ask the head of local administration to transfer more money’. No cash payment is allowed here and only locals can eat in the canteen. It would be devastating for my limited budget to have my daily meal in the restaurant at Norwegian/Barentsburg prices. For Norwegian Krona I could buy only matreshka.

Souvenirs are only things that non-locals can buy in Barentsburg, photo: Anna Stammler-Gossmann

However, in these three days I found out a lot of interesting insights about the settlement. One of them is local place names. If you think that the square with the Lenin statue is the ‘Lenin square’ like everywhere else in Russia, you are wrong. The locals call it the ‘Hilton square’. It is because of the adjucent building with the canteen inside and some rooms that are sometimes used as a hotel, dubbed the ‘Hilton Hotel’.

A typical Soviet era slogan on the hill beside the statue – ‘Miru Mir’ (Peace to the World) is a useful sign for the coming summer: once you can see the sign free of snow.

When you go up the stairs from the dock to the settlement you see a wonderfully green ‘birch forest’ painted by a local artist. The birch tree is a romantic symbol of Russia and maybe it is not only about Soviet and Russian ambitions, but maybe it also serves as familiar piece of the motherland for the hard working (some of them six days a week and up to 10 hours a day, personal conversation) Russians far away from homeland (or from the former parts of the USSR, familiar with Russian symbols).

‘Birch forest’ is a stop for the bus, which brings people to the helicopter that flies to Longir (Longyearbyen in Russian) to bring them back to Moscow. It is also a bus stop for the tourist, who cannot manage more than 200 stairs from the dock and a meeting point for other occasions. Local official announcements for some events usually say – ‘departure from the ‘Birch forest’ or ‘meeting point at the ‘Hilton Hotel’. A local joke imitating the announcements in Russian public transport goes like: ‘This is ‘the birch forest’ stop, next stop – ‘North Pole’ (personal conversation).

Gronfjorden is the name of the fjord located near Barentsburg. However, ‘some people may say “let’s go to the river” as they used to refer to water in Russia’ (personal conversation). For my local conversation partner the sea/ocean is associated first of all with the different vessels that pass by, arrive and depart; locals can identify all of them from far away and tell many stories about them.

‘River’ water is also a power to be respected. Boats from a bigger ship with musicians, who should have performed these days in Barentsburg, did not manage to get to the dock because of too big waves and the community missed the concert.

There is a Russian consulate there, the world’s northernmost diplomatic mission. At the same time you may see more ‘embassies’ as joke place names were introduced to me by locals – Tadzhik and Ukrainian ‘embassies’. These are houses that are inhabited mainly by workers from former Soviet republics, Tadzhikistan and Ukraine. There are many ethnic Ukrainians working here and in June 40 workers from Tadzhikistan and 20 from Armenia have been living temporary there. There are still remains of 15 flag holders’, symbolizing the 15 republics of the Soviet Union, but now only the Russian flag is flattering on Hilton/Lenin square.

Romantic of the Arctic.

Twisted in to a tourist attraction, the ‘last authentically preserved Soviet relics’ of the settlement have their own ‘modernized’ life within the community. Combined with the remains of the past, post-Soviet place names contribute to the picture of what Barentsburg is today, a Norwegian island with a Russian spirit or a Russian settlement that is not entirely its own. Barentsburg is a matter of strategic importance and the topic of political disputes over Svalbard’s jurisdiction. The place is about the history of the Russian role in the Arctic, exemplifies the wish to attract more tourists, stands for a ‘homo sovietikus’ mentality, and after all, Barentsburg is all about the dominance of the state. Nobody in Barentsburg can be here without a contract with the state company ‘Arktikugol’. The decision of who can come here is taken personally by the general director of the company in Moscow (personal conversation). Everything is subsidized and controlled by the state; there is no single commercial enterprise in the settlement, said the locals. 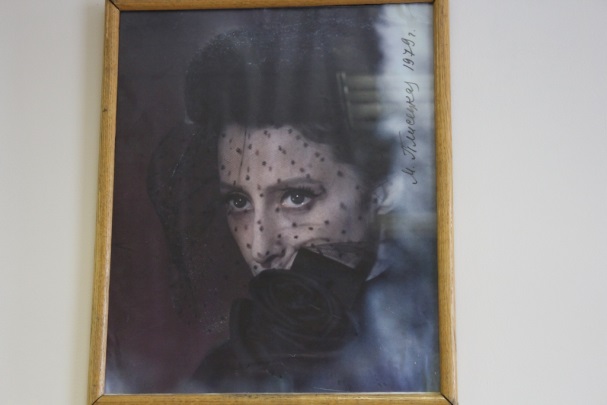 But the romantic of the Arctic is definitely there as well. You can feel it in this stunning landscape scenery, in the picture in the museum of the great Russian ballet dancer Maya Plisetskaia, who spent three years here as a child, in the forests’ paintings, in the memories of the people, who lived in this place here. Maybe these memories can warm up the souls of the mainlanders ‘powdered by snow’, with ‘the Barents Sea in the heart’, as it goes in a Russian lyric song accompanying the Youtube entry about Spitsbergen: http://www.youtube.com/watch?v=x_0mVBMtf5s

This entry was posted in All, Extractive Industries, Fieldwork and tagged Barentsburg, Svalbard. Bookmark the permalink.