Greetings from the Arctic Ocean coast and Gunnarsfjorden, Sandfjord, Skitten fjord, Sör fjord, Ifjord and all these beautiful places around Nordkinn peninsula. In the museum guide in Gamvik you can read that according to medieval scholars, Finnmark was considered as Ultima Thule – the End of the World. Around 100 people, mainly pensioners are living in Gamvik, the northernmost place on the European mainland.
There are a small shop, fish factory, which was reopened three weeks ago, small and nice museum and one semi-wild fox as a local ‘celebrity’.
From my window I have a wonderful view on the Arctic Ocean. It was stormy, windy and quite cold for three days. Now the water is more peaceful, but the temperature does not go above +6 C. We are surrounded by water and I am learning about the meaning of Arctic seawater, its quality, fish/fishers/fishery and ‘oceanization’.
Anna 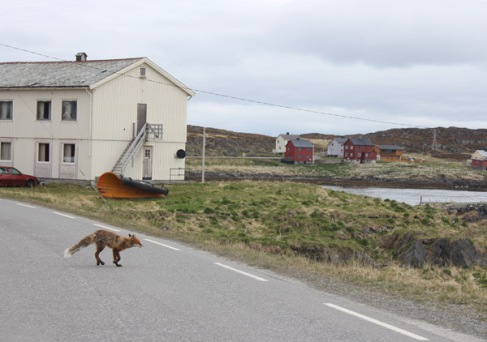 One thought on “Greetings from the Arctic Ocean coast”