Sajos is the newly opened Sámi cultural centre and home to the Finnish Sámi Parliament Hall (Solju). Construction was completed in January, and the first Parliamentary session was held last Wednesday. Official opening ceremonies will take place in April. Sajos is an interesting step for Sámi self-governance, culture, and development in Inari.

Sajos was designed with much more in mind than housing the Finnish Sámi Parliament. The growth of population and infrastructure and the creation of jobs for skilled workers are part master plan of development for Inari. A master plan is common for growing cities and villages. It aims to determine specific goals (for social development as well as physical buildings) for the particular location, and make gradual steps towards those ultimate goals with each single development project. The Sajos building was not constructed for the single purpose of housing the Sámi Parliament, and it is then no surprise it is named Sajos (meaning a site on which people camp for a longer time) rather than Sámediggi (Sámi Parliament). As the Sámi cultural centre the building houses facilities for the Sámi Education Institute, the Sámi Library, the Sámi Archive, Lapland Regional State Administrative Agency, Finland’s Sámi Duodji Shop, SámiSoster ry, the Galla restaurant, conference and event services, all in addition to the Sámi Parliament. 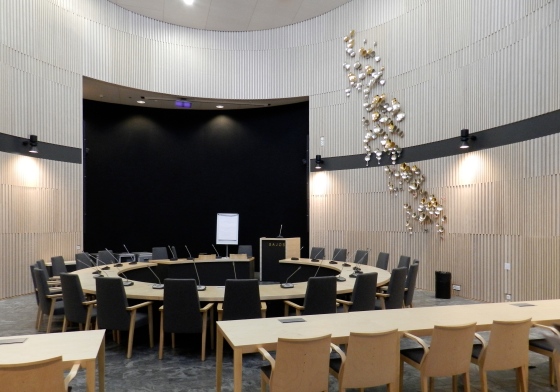 The building is then used to its full potential, as it provides many services for Sámi people to live and develop on the foundation of their own linguistic and cultural background, and generates income to offset running costs as “the largest conference and events venue in northern Lapland”.

Sajos takes direct steps towards goals and a future in which “the Sámi Homeland abounds in jobs for the Sámi-speaking population [and] draws Sámi young people to settle in their home region or return there”. From my perspective local perceptions of Sajos and its goals are positive. One project then leads to another, as one local pointed out, jobs and opportunities are increasing “but we have nowhere for these new people to live; there are no empty apartments or houses in Inari.” Sajos is a large accomplishment itself, but the nature of its development plan will bring even further expansion to Inari.