Movement in the Arctic: World Routes

World Routes is the name of a conference on movement in the Arctic organised by the University of Tartu, department of anthropology. This was a very nice example of an intimate group of people engaging for two days in a very focused way in discussions on what it means to be on the move in all possible different facets.
All the presentations at the conference evolved out of the notion of movement in relation to place as the two ideas that somehow mark the fields of people’s interaction and identification with their environment. 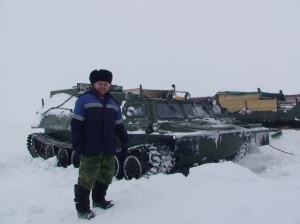 Arctic Anthropology should look at ALL ways of movement: Taxi tank on Yamal 2011

During the first day several presentations focused on migration and relocation in the Arctic, including a presentation by Florian Stammler on relocation and emplacement in the Arctic, trying to find a common umbrella enabling us to bridge the theoretical gap between indigenous and non-indigenous Arctic inhabitants. Florian suggested that the crossroads between time and place is where human inhabitation on the land evolves, or occurs, to use Tim Ingold’s most recently preferred term (Being Alive. Routledge, 2011). The practices on this intersection between time and place is what unites different groups of people. For example, both gas workers and reindeer herders being agents on the same land at the same time create a sort of common ground that shapes their occurrance and evolvement as persons and communities in the North.
While the vast majority of the presentations were on the Russian North, it was also nice to have one on Mexicans in Anchorage by Sara Komarnisky from the University of British Columbia. In a way it was very inspiring to have this fresh view on field sites in Arctic cities. Arctic Urban anthropology can deliver a lot of fresh insights to our field that is more dominated by the study of indigenous livelihoods. Along these lines, Hilary Pilkington’s talk on sense of belonging to Vorkuta and ideas of leaving was very inspiring. She has recently published on skinheads there in Vorkuta. Her findings mirror very well what we found in the INNOCOM project in other places: people can feel attached to northern industrial cities and still plan to leave.

The second cluster of presentations focused more on the experience of physical movement itself, in its various dimensions of walking, riding, driving, sliding etc. Vladimir Davydov and Donatas Brandisauskas shared great wealth of local concepts of practices of movement, when Evenki of the Baikal area develop terms for their movement not commonly used in Russian language. e.g. peshevat’sia for hunting on foot, Stephan Dudeck pointed to the ‘alternative state of mind’ that we all experience when we move together with our research partners in the field. We get to know different stories when we drive with somebody in the car rather than sitting at home. Tanya Argounova in her talk on long distance travel emphasized the fluidity of roads not only in terms of people, goods, information travelling on the road, but also the road itself flowing, e.g. when winter roads melt, or dirt roads are washed away from rain. She also mentioned that anthropology can benefit a lot from widening it not only being about places, which means our field sites, but also movement in all its dimensions. 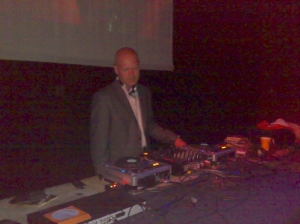 The name of the conference “World Routes” was actually taken from a radio programme by the BBC on world music – not by coincidence. Organiser Aimar Ventsel is not only an established DJ with his own radio programme in Estonia, he also studied music scenes and subcultures in Siberia. Accordingly, the social programme included the offer of a disco with Aimar playing ethnic music in one of Tartu’s clubs. All in all, it was very nicely organised, with wide and at the same time deep discussions which would be nice to develop in the future including more Arctic regions to balance a bit the overweight of Siberia. Papers from the conference are going to be published somewhere at some point. We can announce further details here

This entry was posted in All, Announcements, Theoretical Issues and tagged movement. Bookmark the permalink.
%d bloggers like this: